Higher Education should never be viewed as an extension of childhood.  Clearly, uni students want to be adult and make the most of the independent lifestyle available to them, but there are areas that are often ignored early on:

Just before Christmas, Milkround.com surveyed students and graduates about their career decisions and when (or if) they had made solid choices.  A third hadn’t made a firm choice.  They also found that the majority of those who had decided upon a career direction had done so at the end of their time at uni or after they had graduated.

While this may be the norm, it’s not always sensible to be like everyone else.  As a child, my friends and I would badger parents for popular expensive presents for Christmas (an equivalent of a Nintendo Wii, perhaps).  “All my friends are getting one,” we’d shout.  If we were lucky, it would work and we’d get what we wanted.  Funnily enough, we regularly believed what we were trying to persuade our parents.

Now, when we’re badgered about the future and making plans for the life ahead of us, it’s not unusual to use the same tactics we used as children (and believe it just as much).  “Nobody else is obsessing that much!” we argue.  “None of us have plans; it’s not like that nowadays,” we point out.  We continue, “There’s plenty time to do that.  I’ve only just started this degree…what’s the point in getting ahead of myself when I’ll probably change my mind later anyway!?”

First, it’s not obsessing.  Second, we all have plans, but it takes guts to plan ahead with gusto.  Third, who cares if you change your mind later?  You’ll learn a lot on the way, so it won’t be for nothing.

I would never suggest that students aren’t thinking about the future at all.  Concern for the future is more important than ever to a lot of you.  However, the Milkround survey begins to show that commitment comes near the end of a degree.  In an economic downturn, competition is going to be increasingly fierce, so it will pay to begin your work toward the future as soon as possible.

Even if you don’t move toward securing a particular job and you don’t care for related work experience over the summer break, you can certainly get involved within the niche you want to be in by writing a blog, reading up on the hot topics and current events in that field, and making yourself known one way or another to the people that matter.  What you do is up to you, but it’s a wise move to do something!  Bit by bit or all out, it’s up to you…but make a start now.

“But the economic situation gets in the way.  I don’t know what’s going to happen tomorrow, let alone several years down the line!  Surely it’ll be better to wait and see what happens?”

That’s not the point.  The more focused you are, the more clearly you should spot the best routes, notice gaps in the market, and build up your own portfolio to boost your brand.  With that focus, even someone without visible passions or career goals can begin to find what switches them on.

“You can say that, but I don’t know have a clue what I want to do.  I’m not interested in anything.”

I’ve heard this a number of times.  Ask yourself why you are at university.  Consider what you’re studying and what gets you going each day.  Even if you only live for drunken nights out and holidays, you could move toward some sort of hospitality rep career.  If you spend all your waking hours gaming or building social networks, check how you could use that in a vocational sense.  Some people get paid to play games all day, while some of the biggest names of the moment are those who know exactly how to build social networks.

If you don’t notice any career route from the ideas you already have, it doesn’t mean you’re out of options.  There are loads of possibilities out there you won’t know about to even consider.  Speak to careers advisers, read about employment in a sector you have a hobby with (whether it’s a sport, a type of product, or even a way of life), and give some detailed thought on where you want to be in the future.  I doubt you’d choose ‘unemployed’ as your career choice, so what would you be happy doing?

“There are too many people chasing after the career I want.  What the point in trying?”

Don’t put yourself down.  The whole point of considering your career as soon as you can is to be in with the best chance of getting where you want to be.  When you’re armed with all the information you need to build an impressive portfolio, speak to the right people, and start working toward that career right now, you suddenly improve your chances of success by a huge amount.

It all boils down to this: 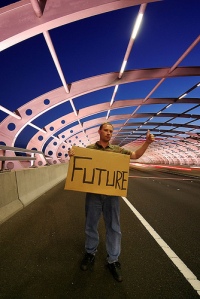