I collect quotations from various places. Books and online. I make notes on the stuff I read every day.

I thought I’d drop 10 examples your way in this post. Just because. Maybe something will inspire or interest you further.

You never know when a comment here and an example there can come in handy. I also collect random stories that are of no use at the moment, but are quirky. When the right time comes along, I use the stories to inject some fun into a piece of writing.

Always be on the lookout for inspiration. You may find nothing of interest in the examples below. But when you see anything that makes you stop and think, it’s worth making a note of it. The more you can collect, the more you have at your disposal later on.

Note it down. Save it for later.

Collecting little thoughts is one way you can start to make good use out of what you consume.

“You will find the future wherever people are having the most fun.”

From the Introduction to Wonderland by Steven Johnson

In other words, get playful!

“Ultimately innovation is local. You have a problem to fix, a group who want to solve it, and you come together in a common space to work it out.” 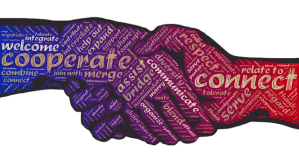 “…holding on to the idea that willpower is a limited resource can actually be bad for you, making you more likely to lose control and act against your better judgment.”

Willpower is limited if you think it is. I will you to keep going!

“If takers are selfish and failed givers are selfless, successful givers are otherish: they care about benefiting others, but they also have ambitious goals for advancing their own interests.” – p.182

From Give and Take by Adam Grant

Giving is wonderful, so long as you remember to give to yourself at the same time.

“A sociologist at the University of Chicago surveyed the references cited in a database of 34 million scientific articles. He analyzed the citations with respect to whether the articles cited were available online. The more journals became digitally available, the more recent the references became, and the narrower their scope.” – p.61

The book was published in 2016. That feels like ages ago…

“Student loan policy wonks have always assumed that if you provide guarantees and limit liability/risk on student loans, then students will be ok with debt.  But if the facts of the policy don’t change people’s attitudes about risk, then the policies will fail, no matter how well they deal with the actual problems at hand.”

This is just as relevant for parents too. The idea of debt, no matter how it’s presented, is too much for some. Especially when there have been past problems with more traditional debts, or they have spent their life avoiding debt. What do you think those parents will say to their children who want to go to university?

“Podcasting is sometimes dismissed as nothing more than radio in your ears, on your own schedule, but I beg to differ. It’s far more intimate than traditional radio. And news organizations that realize the power of this intimacy will likely have an advantage in the long run.”

On-demand audio for the win.

“Humans live peacefully with contradictions precisely because of their capacity to compartmentalise. And when contradictory statements, actions or emotions jump out of their contextual box, we are very good, perhaps too good, at finding justifications to soothe cognitive dissonance.”

But when you recognise this, you can use the abundance of contradiction in wonderful ways too. Embrace the push and pull.

“Crucially, our ‘social orientation’ appears to spill over into more fundamental aspects of reasoning. People in more collectivist societies tend to be more ‘holistic’ in the way they think about problems, focusing more on the relationships and the context of the situation at hand, while people in individualistic societies tend to focus on separate elements, and to consider situations as fixed and unchanging.”

Specific generalisations. The article has some thought-provoking stuff.

A reason why conservatives tend to use nouns more than liberals is because nouns outline greater stability. Describing someone using nouns “implies more certainty and permanence about their state of being”.

Pay attention to how people describe things. Do they “feel positive”, or are they “a positive person”? You may get a better insight when you listen to how the sentences are constructed as well as what’s being said.

Think of the little thoughts and stories you collect as stepping stones. Each step can take you closer to new ideas.

Over to you. It’s time to create out of what you curate.