Recognition of diversity is a strange thing. The more connected we become, the more we feel at once individual and the same.

Developing a collective voice on a mass scale for a particular cause is made easier through common connections. Yet realising our many differences is just as simple to achieve.

The push/pull nature of diversity makes the student voice a tricky concept to form and agree upon. The massification of higher education has led to incredible diversity. How can you possible represent everyone as if you’re operating as one voice?

STICKING TO THE ISSUES. FIRST ISSUE, WHAT ARE THE ISSUES?

Perhaps the answer is to support voices and diversity, as opposed to deciding a stance on many elaborate issues. Patrick Wilson asks NUS to “stick to supporting lowering the voting age” and to “keep on affording students their rights”. Since students cover such a diverse range of opinions, moving outside the realm of student issues is tricky.

So why do it? Well, it depends how you view the situation. Since students are human beings with different ideas, backgrounds, circumstances, beliefs, and so on, you could argue that nothing is outside the realm of student issues.

Years ago, someone told me that the remit of the student movement (if you wish to call it that) went as far as considering and supporting matters relating to being a student at a place of learning. Associated issues–such as accommodation and health–were fair game. I wasn’t exactly clear what the unassociated issues were.

Perhaps that lack of clarity is part of the problem. When every concern of an individual is associated with being a student, given the fact that they ARE a student, where do you stop? Which areas should NUS stick with and which should they ignore.

Once you start leaving one issue alone, some students will be unhappy. Diversity isn’t being properly represented, they might argue.

Deborah Hermanns, an organiser for the National Campaign Against Fees and Cuts, suggests that unions could look to what is done in Germany’s universities:

“The German conception of student unionism is relatively simple: it is to politically represent the student population to the university, to advise on issues such as financial support or visa questions for international students, and to take on wider political questions. These aims are reflected in union structures, which allow for much direct democracy and very little bureaucracy. For example, at Freie Universität Berlin, the student population elects a parliament which in return elects the executive committee. Decisions about campaigns and allocation of funding are made at a weekly meeting which is open to all students.” [Times Higher Education]

Does this extend, limit, or completely change the idea of representation and diversity? Under a German system, are students better served in some areas and lacking in others where the UK thrives?

Wherever you draw the line, policy needs to be discussed and agreed upon with the aim to achieve consistency, balance, and clarity. Patrick Wilson’s article for Lancaster’s SCAN highlights an issue that isn’t new. New policy was drafted and the suggested wording caused the policy to be denied a place. No doubt the policy will be reworded and voted through at a later date. It’s happened before and it will probably happen again.

When this situation occurs (especially over controversial and problematic areas), people begin to discuss why this is good/bad, necessary/unnecessary, too political/not political enough, and so on. Were too many people being condemned or does the condemnation not go far enough? Is the policy not inclusive enough or should it focus on a more focused group of students?

You have to work at diversity. There is no way of guaranteeing success on all fronts. However, an openness to diversity and an acceptance of others, regardless of other factors, is a strong move towards progress. The more perspectives we embrace, understand, and listen to, the more likely we are to see the bigger picture in all its glorious detail.

“Diversity is not only about bringing different perspectives to the table. Simply adding social diversity to a group makes people believe that differences of perspective might exist among them and that belief makes people change their behavior.
“Members of a homogeneous group rest somewhat assured that they will agree with one another; that they will understand one another’s perspectives and beliefs; that they will be able to easily come to a consensus. But when members of a group notice that they are socially different from one another, they change their expectations. They anticipate differences of opinion and perspective. They assume they will need to work harder to come to a consensus. This logic helps to explain both the upside and the downside of social diversity: people work harder in diverse environments both cognitively and socially. They might not like it, but the hard work can lead to better outcomes.”

REPRESENTING AS MANY METAPHORICAL TRUMPETS AS POSSIBLE

The student voice is sometimes a confused noise, rather than a clear outpouring of flowing sentences. You could dismiss the noise as a pointless waste of time. But wouldn’t it be better to give even more attention to the noise and try to understand garbled attempts at being heard? Isn’t it important to work out which voices haven’t called out at all?

A baby doesn’t make much noise in the first few weeks, other that cries and gurgles. When a baby starts to find its voice, it takes months and years for it to develop. Over time, the voice becomes clearer and we begin to understand a child’s needs and what motivates them.

A child cannot do that on their own. They need help and nurturing. But they do have their own metaphorical trumpet to blow.

The student voice consists of many trumpets. It also needs help and nurturing. There are still garbled attempts at being heard amongst the noise and some voices that aren’t yet heard. 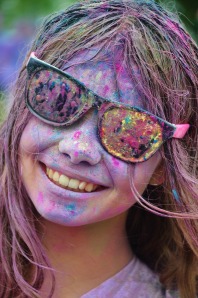