Would you like a degree in Waste Management with Dance?  Sound like a strange combination?  Apparently not that strange.  The course is available at Northampton University.

The Telegraph has reported on how the Higher Education Funding Council for England (HEFCE) wants to see no change to the way it allocates funds to universities and, therefore, would allow all sorts of bizarre degree courses to continue.

I say ‘bizarre’, but what’s missing from analysis of HEFCE’s stance and The Telegraph’s view is opinion from students taking these courses. 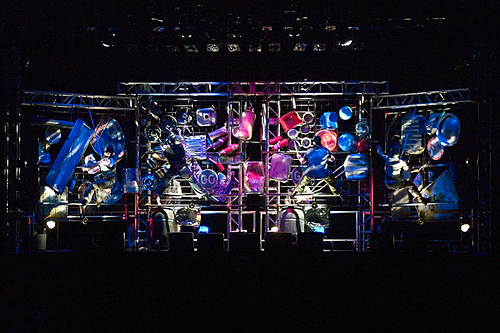 Might Stomp explain a degree in Waste Management & Dance?

A degree in Third World Development with Pop Music (or Dance with Equine Studies, if you’d prefer) may be perfectly sensible to students taking on the work.  Or perhaps those students are being led down a false trail of hope.  Or they just want a degree and were happy to take whatever they could in current climate.

Until recently, Media Studies used to face the wrath of critics who were ready to dismiss it as a pointless “Mickey Mouse” degree.  However, that particular stigma has disappeared as the years have gone by.  There may still be difficulties securing employment for many graduates, but that’s the same for many apparently worthwhile degrees.  Employability isn’t guaranteed in any field.

As universities cover an ever growing number of bases it’s not so surprising to find joint degrees that cover Waste Management and Dance.  For instance, you may want to combine a vocational interest with an important hobby.  Or you may want to further your experience in ways that cannot be covered with two similar subjects.  I doubt there will be much subject crossover in lectures if you study both Waste Management and Dance.

Many camps are keen to see HE as a resource for churning out employable individuals with a vocational talent.  But that’s never been the overarching point of universities.  You would expect a certain level of development to assist in employability and vocational expertise, but it’s not the sole purpose of HE.

That said, many students take the university route because they see nothing better in their circumstances or because they think it’s the passport to future career success.  Neither may truly be the case, but with a combination of more traditional careers requiring a degree and a lack of proper careers guidance and information for young people, I’m not surprised the situation has arisen.

“Barry Matthews, chair of the Professional Association of Teachers, suggested that teenagers were being brainwashed into thinking that university was their only option. Matthews questioned the need for vocational degrees, asking whether bricklayers needed degrees or practical ability, whilst he was also scornful of new ‘Mickey Mouse’ degrees in surfing or soap operas (Matthews cited in Curtis, 28 July 2004, p. 8). It is clear that there are now many new degrees in the portfolios of universities. Degrees have in some ways replaced the old apprenticeships and the practice of in-house training. For example, studies in journalism and in nursing are now successful degrees. We suspect that there will be those who believe that universities should not teach such subjects and should stick to teaching more traditional disciplines. Such a position fails to take into account the changing nature of the job market and the changing interests of students.” [Source]

I don’t have an answer to conclude with here.  In many ways, I don’t see much to answer.  Any degree with little value to the learner should be scrapped, whatever the discipline.  I’m not just talking about employability skills.  For whatever reason, it could be an English or a Biology course that fails in providing value.  At the same time, a single university offering Criminology and Pop Music Production may give students an amazing insight that no other could.  Degree title is irrelevant.

Students and graduates need to be part of the discussion as to what courses matter.  Their voices need to be heard and they need to be told the truth about why their course exists.

Without proper grounding, it’s pointless to worry about funding based on course titles.  And while nobody takes my proposal for a joint degree in Mosh Pit Sciences and Handbag Psychology seriously, I’ll stick with that view…