I’ve spent the last few days away from computers and updates.  All very nice, but I’ve had to catch up again.  Now I’ve done that, what better time to share some EduLinks with you? Weekend reading ahoy! 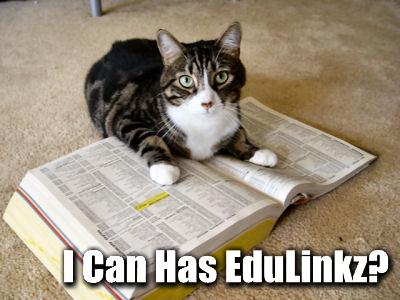 “people have an intuitive understanding of how a person’s thinking style affects their vulnerability to persuasion, known formally as ‘the elaboration likelihood model’. This is the idea, supported by research findings, that people who have a greater inclination for thinking things through tend to be less swayed by adverts that use superficial tricks like beautiful models and slick graphics, but are more persuaded by adverts that make an intelligent argument. The jargon for the character trait in question is ‘need for cognition‘.”

Would you take a smaller reward now, or a bigger reward later?

Facebook can get pretty cluttered if you’re not careful.  Get back that manageable look with these handy hints.

I bet you’ll be in agreement with almost all the reasons Sid gives to why we keep hold of clutter.  Watch as you nod along to most, if not all, the reasons for not letting go of the junk.

Diary of a University President – The Campus Experience

Does living on campus help you integrate into the university community?  Does living off campus restrict you too much?

I don’t believe that simply thinking positive or focusing on happiness will take you where you want to go.  But it’s a start.  Without a positive nature, you’re more likely to suffer blocks and not work to the best of your abilities.  Some keys to happiness, explored in this article, include: money doesn’t buy happiness but you may get a short burst of positivity, relationships are important to happiness, experience trumps belongings.

MakeUseOf – How To Use Delicious To Organize Your Student Life

If you’ve never used the social bookmarking service, Delicious, you’re in for a treat.  Not only is it a useful tool in general, it’s also a boon for your study links.  This clear and detailed ‘how to’ piece tells you what you need to know.

With an election campaign in full swing, the links above take you to what the three main parties say they want to do for HE if they come into power.  For a little extra, the Times Higher Education gives a brief rundown of the manifestos in two pieces. One covering Labour and Conservative together, with a separate piece on Liberal Democrat policies.